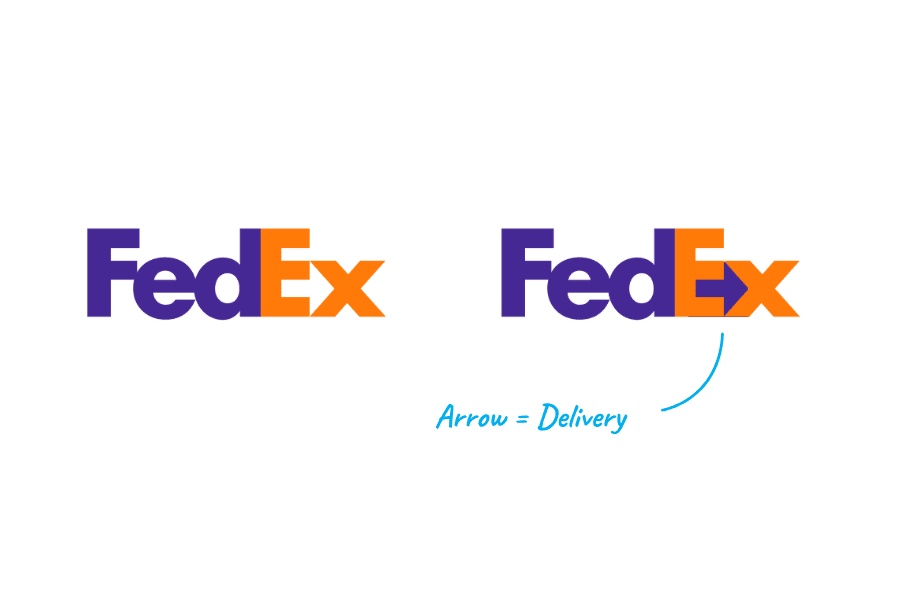 FedEx is the most famous example of a negative space logo. The arrow between "E" and "X" stands for fast delivery and forward-thinking. 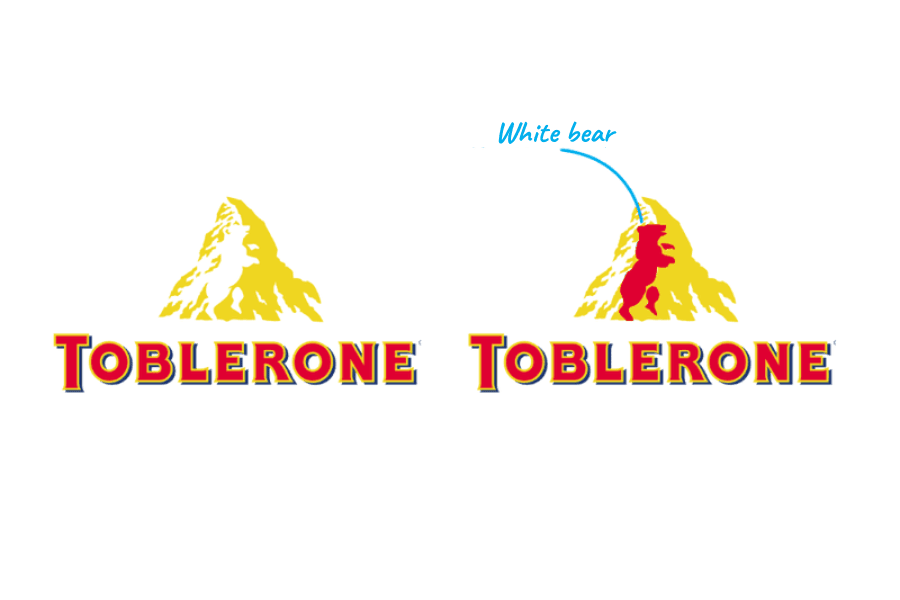 Toblerone features a hidden bear in its logo. It represents Bern, Switzerland-the place where the company was founded.

NBC features a hidden peacock's body in its negative space. The peacock represents the increase in color programming. I reviewed the top 10 best negative space logos with unique designs. Overall, the top three are FedEx, Toblerone, and NBC.

We can easily identify them as our brains always try to discover patterns and make sense of missing things.

How are negative space logos made?

Negative space logos are made by utilizing the background of an image to create another image.

They use the space around and between the subject of the main design to grab the attention of people.

Most of you should have probably seen negative space logos even if you haven’t realized them.

When designed strategically, negative space logos help to bring balance to composition, and they are also delightful to look at.

In this blog, I will be demonstrating the top 10 best examples of negative space logos.

The FedEx logo is considered the best among the negative space logos of all time.

FedEx features a hidden arrow between the letters “E” and “X” that stands for speed and delivery.

This is one of the most famous companies that provide rapid, reliable delivery to more than 220 countries.

Lindon Leader has designed the latest version of the FedEx logo and it's considered the grandaddy of negative space logos.

The logo comes with two words, “Fed” and “Ex”, and both words start with a capital letter.

The white arrow of the logo represents speed, accuracy, striving for perfection, and perseverance in achieving goals.

This negative space logo has won a lot of design awards as it perfectly depicts the notion of the “forward-moving company."

The company even changed its name from "Federal Express" to "FedEx" as the logo became so popular.

Learn more about the FedEx logo

Toblerone is a negative space logo inspired by the location of the company.

Toblerone features a hidden bear that stands for their city of origin.

This is a famous chocolate brand produced in Bern, Switzerland.

The location of the company Bern, Switzerland, which is famous for its high mountain and also known as the "The City Of Bears", has inspired this logo.

The designers have intelligently managed to hide a bear's silhouette in the Toblerone logo's mountain.

The Toblerone logo has three colors-gold, white, red, and blue.

The logo designers have used the Meta Plus Bold Caps Typeface in this logo.

Overall this logo design portrays a lot of information about the brand's heritage while making you think about chocolate too.

Learn more about the Toblerone logo

The NBC logo was inspired by an abstraction of a feathered peacock, indicating richness in color.

NBC features a hidden body of the peacock in the logo.

This is a famous American English-language broadcasting television and radio network.

They have used a peacock in their logo since 1956.

As the company became increasingly famous, it designed multiple logos and managed to use the negative space to fade a peacock into its logo.

The peacock is used to indicate the increase in color programming.

By including the feathered peacock in the logo, the logo designer has managed to give the logo a modern and streamlined look.

Accordingly, NBC is among the best negative space logos designed so far.

Learn more about the NBC logo

WWF (World Wide Fund for Nature) is an excellent example of a logo where negative space is used so cleverly that many people won't even realize it's a negative space logo.

WWF features a hidden bear that represents coverservation of wildlife.

World Wide Fund for Nature is an organization that works to preserve and reduce the impact of humans on the environment.

Chi-Chi, a giant panda who arrived at the London Zoon in 1958, has been the inspiration to create the WWF logo.

Sir Peter Scott created the original logo in 1961, and the negative space logo was built in 1986 at the San Francisco office of Landor.

The giant panda in the logo symbolizes the company's mission to conserve wildlife.

Generally, we can consider it a logo representing the conservation moment of animal life.

Learn more about the WWF logo

USA Network is another famous brand with a negative space logo.

This is an American basic cable television channel, and they have taken a great approach in creating a negative space logo.

The logo design of the USA Network only consists of the letters "USA."

Imaginary forces designed this logo, and Future Bold is the typography used in the logo.

Using the negative space has made the company stand out and more memorable than its competitors.

So, USA Network is another example of one of the best examples of negative space logos.

Moving on, F1 is also a great example that depicts the great use of negative space in their logo.

F1 logo has a hidden number “1” in the negative space.

F1 also known as Formula One is the highest-class international racing contest for formula cars.

The F1 logo was designed by Carter Wong, a London-based design agency.

The logo consists of The letter “F” and a red color design.

The designers have strategically used the space between the “F” and the red design to form the number “1” between them.

The black color of the logo represents power and determination.

While the red color represents passion and energy.

However, Liberty Media took over F1 they are not using this logo anymore.

Learn more about the F1 logo

Spartan Golf Club features a golf player, face of a soldier and power guage in its logo.

Spartan Golf Club often gets highlighted for its great use of negative space.

At first, we only see a player playing golf in the logo.

However, if you look closer, you can also see a power gauge above the golf club.

Moving further, you can also see the gauge as a spartan helmet and the person playing golf as a soldier's face.

The designers have used a New Sans-Serif font to create this logo.

The Spartan Golf Club is an elegant and unique use of negative space in logo design.

I believe this is one of the best examples of the use of multiple images in negative space logos.

This is a famous ice cream company that specializes in alcoholic and gourmet flavors.

It has a bunch of stylized letters that form the wordmark "Mister Cooper" into the shape of lips.

Besides that, we can also see the word "ice cream" in the middle of the logo.

Looking at its logo, anyone can easily understand it's an ice cream company.

The senior designer of the logo, Kath Tudball, said that they had to play with several different approaches to settle on the idea of lipstick marks.

Mister Cooper is another example of the great use of negative space.

Elettro Demestici is also a negative space logo that focuses on simplicity.

ED features the letters “E” and “D” in their logo.

This logo looks very basic, and most people wouldn’t notice this as a negative space logo at first glance.

People only see a European-style plug when they first look at this logo.

However, the logo represents the brand letters using both negative and positive space.

You will see the letter "E" in the white space when you look closer.

The letter "E" in the negative space is then followed by the letter "D" in the positive space.

It is a great logo that minimally and elegantly depicts the company's name.

The ED logo is an excellent example of how form and function can exist harmoniously.

Girl Scouts is the next great example of negative space logos that brings more clarity and unity.

It is a famous youth organization for girls in the US.

Unlike other logos, this logo hasn't used negative space to send an additional message.

The logo was designed by Saul Bass, a professional designer in the 1970s.

The designer simply has used the negative space to add more clarity and unity to its logo.

The logo has two instances where negative space is used.

The green shape that looks like a bush or a tree that represents the great outdoors is the first instance.

While the next is the white space where we can see three female faces.

The three girls are pointing toward the future, which depicts they are ready to help each other despite their differences.

And lastly, the smiles on these girls' faces make the logo reassuring and inspiring.

Negative space logos are logos that use the background of an image to create another image inside it.

Also, check out this image that illustrates other clever and inspiring ways to use negative space in logo design.

Negative space logos come in handy when conveying multiple ideas about a brand.

They are effective designs that help brands to portray multiple thoughts and visions about themselves.

If you want to create a logo for your brand, I suggest hiring a professional designer.

A professional logo designer can help you in bringing your ideas into creating beautiful logo designs.

Are you looking to hire a professional logo designer?—Just shoot me an email.