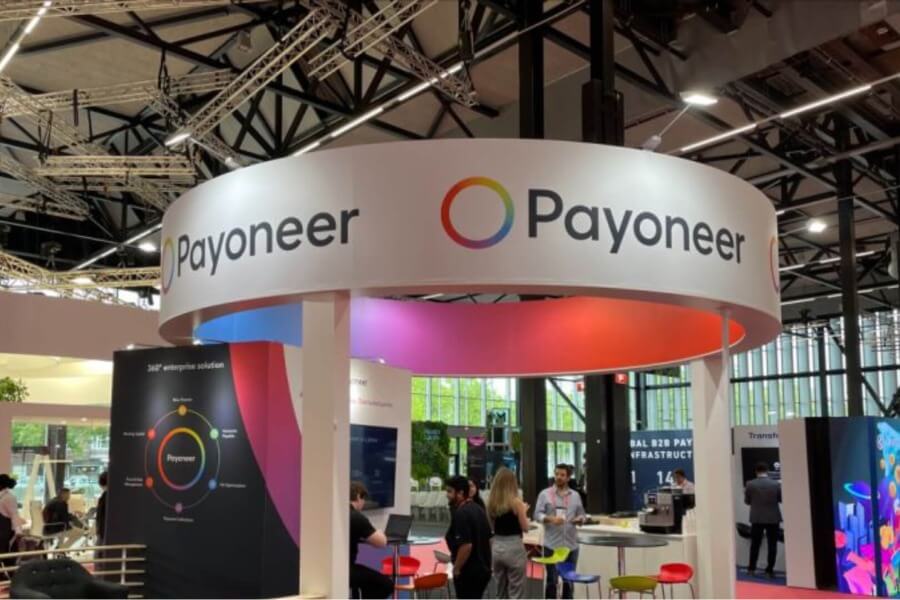 The logo has a dominant blend of blue and purple colors. The typeface is also simple but appealing to show professionalism.

The fast flag is the logo's unique feature. It is sky blue to symbolize the company's goal of borderless money transfer.

The most notable aspect of the logo is the double P monogram. This symbol has two meanings— togetherness and forwardness. If you're looking to invest in the fintech industry, your brand must be distinct. Here are the top 10 well-designed fintech logos to get you started.

If you’re setting up a fintech enterprise or revamping an existing one, you might be concerned about your business’ logo design.

Your logo needs to be appealing, from the color, typography, and design, in a way that exudes trust and professionalism.

What message should a fintech logo convey?

Besides attractiveness, your fintech logo will need to portray the idea behind your brand.

It could speak to your name, the benefit you provide, or the solution you offer.

If your logo is done well, it will help you instill trust in the people you’re trying to connect with.

By the way, I have a previous article on the logo design process—take a look at it for some helpful insights.

In this article, I will review some of the best fintech logo examples.

By looking at some of these examples, you will understand what a professional logo should look like.

Let’s get right into it.

Stripe is a company that allows you to perform financial transactions like online payments for your business.

Stripe’s logo is blurple for professionalism and has two diagonal strokes.

Unlike most logos, this one has nothing more than just the brand name.

However, several aspects make Stripe’s logo stand out from the rest.

Let’s begin with the striking feature is the hue—it is a brilliant mix of blue and purple.

On a closer look, you’ll also notice the uniqueness of Stripe’s logo typeface.

For instance, each top of “t” and “i” has distinct diagonal lines that distinguish them from the rest of the font's dominant design.

So, despite the Stripe logo’s simple nature, it has several aspects that rank it among the best fintech logos.

Several aspects of the logo stand out.

For instance, the fast flag means that Wise has no rigidity, and the fund transaction charges are manageable.

On the other hand, the flag’s sky blue color signifies money transfer without borders.

Navy blue is also part of the logo’s color palette, which can be used as a background or for designing the wordmark.

Whichever the case, the color illustrates power and loyalty.

Lastly, using of Averta Bold on the Wise wordmark is an important visual appeal strategy, as the font stands out.

PayPal is a multinational fintech company based in San Jose, California, and it offers services like online payments and money transfer.

The logo’s double P emblem is overlapping and italicized for uniqueness.

It introduced its first logo in 1999, which remained part of the company for eight years.

It also brings out the idea of forwardness, thanks to the solid italics.

Further, PayPal’s logo has a unique color palette, including purple and blue.

Like with most fintech logos, combining these colors bring out the feeling of reliability and professionalism.

The wordmark also uses a unique Sans-Serif font, making it stand out from competition.

Learn more about the history of PayPal’s logo

Remitly is a Seattle-based company that offers remittance services in the United States and across the globe.

The handshake symbol on the logo is a sign of trust.

The logo has several aspects that make the company stand out in terms of the services it offers.

For instance, the handshake symbolizes partnership and cooperation between Remitly and its customers.

Consequently, this relationship builds trust, which is crucial in financial-related transactions.

Further, when you keenly observe the logo, you’ll notice that the hands form an envelope-like shape, which shows confidentiality.

With these features, you realize that Remitly has one of the most insightful fintech logos.

Payoneer is an American-based fintech company that offers digital payment services for your business.

Payoneer’s logo has a gradient rainbow palette to show progress.

This new logo was inspired by the need to emphasize professionalism and progressiveness.

It consists of a stylishly minimal logotype positioned to the right of a colorful emblem.

As for the wordmark’s lettering, it is done in black to match the crisp edges of the graphics.

The logotype is also set in a basic, contemporary sans-serif font which conveys simplicity of use.

The standout feature, the emblem, is circular and features a distinct rainbow-like color palette.

Acorns is a California-based fintech company specializing in micro-investments and automated investing.

In this digital era, the Acorns company logo designers have captured several aspects for it to stand out.

Let’s begin with the emblem—it is in the shape of an acorn, signifying unlimited potential and growth.

The color choice also connects the company to the services it offers.

In this case, green represents money, prosperity, and growth.

Lastly, the wordmark letters are lowercase and use a custom font typeface.

Starling Bank is a London-based digital bank that operates digitally, eliminating the need to physically visit a branch.

Being an online bank, the logo designers captured several aspects to attract customers.

For example, you’ll notice a sync symbol and a purple circle.

The sync symbol signifies how Starling Bank interacts, collaborates, and synchronizes with the customers.

On the other hand, the purple color symbolizes wealth, meaning your finances will grow.

When a bank conducts itself professionally, it builds trust with its customers.

Robinhood is a fintech company based in Menlo Park, California, where you can perform commission-free stock trades.

The company’s logo has a feather on the wordmark’s right side.

The new logo was introduced in 2020 to make finance seem more engaging and understandable.

However, not a lot changed from the initial company logo.

For instance, it retained the feather emblem, although it appears smaller.

This simple image symbolizes the legendary Robinhood, after whom the company is named.

As for the wordmark, Robinhood’s logo designer replaced the initial green color with a black and bold one to symbolize stability.

Webull’s logo has a bull-like emblem to show power.

Unlike most fintech logos, Webull takes a minimalist approach with a simple yet complex logo.

To begin with, it features a convex shape that represents a bull and its horns.

You will also notice that the shape is blue, with the wordmark lettering being black.

On the other hand, the blue color represents the company’s professionalism, with the wordmark’s black lettering signifying power.

Chime is a fintech company in San Francisco, and it partners with two banks so that you can access your money faster.

Most fintech logos have emblems that distinguish one company from another.

However, Chime lacks such a symbol but has a standout wordmark.

For instance, it features a modern custom font that not only contributes to the sleek look but is also legible.

The letter “m” is the typeface’s most distinct, with the middle part being specially designed to differentiate it from the other letters.

As for the color palette, the logo is green to reflect wealth and growth, which are Chime’s primary goals.

Notably, all wordmark letters are lowercase.

A solid brand identity serves is the compass and anchor of a successful fintech marketing plan.

But a solid brand begins with a well-designed logo that captures the attention of potential customers.

What are the factors to consider when designing fintech logos?

Whether you're designing the logo yourself or engaging a branding agency, you must understand your market and culture.

You want a design that not only stands out but also has a close connection to the people.

In this article, I have reviewed 10 of the best fintech logos, and if you have reviewed them, you should have no trouble getting started.

If you’re looking for professional services, just shoot me an email.